There is a picture in my high school yearbook, of me sitting behind a desk, holding a fanned-out handful of fake money, with a caption that reads: “Most Likely To Succeed”. Contrary to what might be taken as popular opinion, I don’t believe my classmates bestowed me with that honor because their concept of success—mine or anyone else’s—was based on how much money one might amass, but rather because I was a person who demonstrated smarts, talent, intelligence, passion, creativity, kindness, commitment to my values and to living a life of integrity, with compassion for all.  True success, especially in the minds of young people, isn’t based on the prospect of making lots of money. It’s about having, and leading, a good life.

It’s worth mentioning that I wasn’t alone in the photo; my male counterpart was seated next to me, with his own handful of toy dollar bills… I suppose it’s necessary to apply gender equity when making such decisions, to make sure that us “girls” actually win something and/or to accentuate that men and women are held to different standards. For the record, it wasn’t my idea, or his, to hold money behind a desk; that was the photographer’s vision. We could have been sitting in a sportscar, I suppose, or maybe we could have been hanging out in deck chairs, wearing shades and soaking in some sun, or we could even have been giving each other high fives instead. But, as we’re led to believe—despite a lot of evidence and our own core beliefs and most important life experiences to the contrary—money is the most obvious, and most revered, indication of one’s success in life.

Many years before that photo was taken, I sang a song in a school play—my very first solo public performance to a large audience—called “Stars Don’t Carry Money”. The story, which I can scarcely remember, at my age now, was a lesson in Love. I was cast in the “starring” role, for which I wore a costume expertly crafted by my parents and me: a giant, two-sided star made of cardboard, not a clapboard ensemble but with enclosed sides. It looked something like a (DQ) Star Kiss, except slightly elongated and covered in fabric with bright, sparkling threads of silver woven through, and trimmed with shiny tinsel around all the edges, including around the oval which framed my young face.

I was twelve at the time, and had been going through a rather rough spell at school that year. I went to a very small elementary school through the sixth grade, and there were only 5 or 6 girls in our entire class of 20 or so, for most of our years together. From year to year, our relationships shifted a little, with of course one “prettier” girl holding out as most popular, and the rest of us shifting position around her in various ways. To a large extent, there was a clear pecking order: the pretty one and her best friend at level 1, and two or three others at level 2, whose importance in relationship to the level 1s fluctuated according to whatever laws govern such things, and then at the bottom were the poorest, shyest, homeliest girl(s). That year, for reasons not entirely clear to me, I was delegated to the bottom position, for the first time, in a manner that I seem to recall came as a shock to me, in spite of the fact that I had always been something of an outsider, what with going to higher grade levels for math and reading, and having such ugly red hair, and not watching the Dukes of Hazzard.

Thankfully, for the remainder of that year, my younger sister and her ragtag passel of friends took me in on the playground—little sisters rule!—but it was a difficult time for me, at a tender age. I recount this here, now, because one of the somewhat cruel aspects of my relationship with my former friends was that they mocked me for my role in the play, behind my back but within earshot, and about having to wear such an ugly costume... There was also that one time I was shamed for liking watermelon, but that’s another story. This story here is about a song, which went something like this:

I do wish I could remember the last line—my mother surely would—but I’m reluctant to attempt to paraphrase it here… And let their feelings show? Help our hearts to grow? Give the world its glow?

There are some questions the internet can’t answer.

Anyway, it was a sweet song, and I had a beautiful voice, which of course I didn’t really know at the time—I just knew I enjoyed singing. This was by no means a “Star Search” performance; I was just a girl, not a star, and I sang with the voice that I had, the voice which was given to me, into my care, when I was born into this mad, wonderful world.

Years after that—remarkably to me, now, fewer years than I have resided in my current home—I graduated from high school with a whole different set of friends, but much the same set of values, hopes, dreams, possibilities... In my (co-)valedictory address, I gave an inspired, heartfelt, meaningful, and at times poignant and humorous speech, which moved an entire gymnasium filled with my classmates, friends, their families, our teachers and other members of the community.  By then I was used to being on stage, never not nervous but always capable of performing. It was never an act, though; I always meant it. And all my peers, and others who knew me, knew that. That’s the reason I was voted “most likely” to do whatever it was I was going to do…and that’s why they believed me, for however brief a time, when I closed my speech by invoking the wisdom of Joseph Campbell and urging every single one of them to “Follow Your Bliss”, that it could be done.

It would be a lie to say that I don’t know what happened to that girl and young woman-to-be, but I do wish I knew where she’s gone.

So yeah… Mercury’s retrograding the crap out of me apparently, and I sure hope we get some fucking Venus back here soon!  Thanks for listening.
Posted by fremenine at 1:01 PM No comments:

Posted by fremenine at 4:30 AM No comments:

Waking Up To Failure

That's all my life is right now. 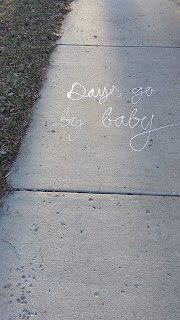 Posted by fremenine at 6:24 AM No comments: