Ahhhh, Spring.  It has finally arrived.

By Sunday afternoon, our recent snowfall had nearly melted away, and with the temps pushing 60 and a whole day to do as I pleased, it seemed a fine time for pruning.  So I listened to this guy (and a few others), and I believed him when he told me that I could not kill my peach tree, not to be nervous, and it's the right thing do, folks...etc. 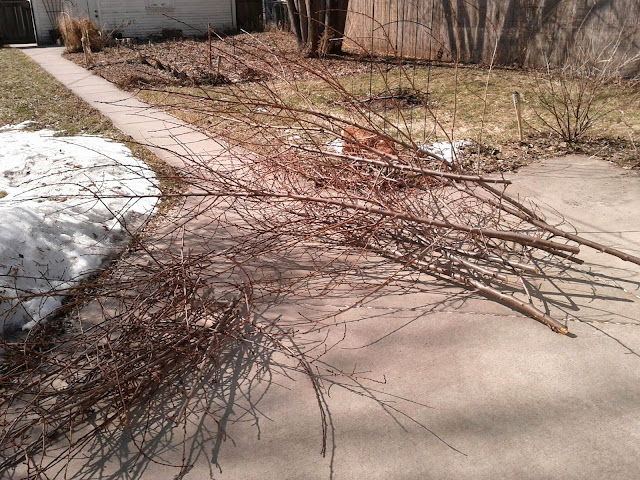 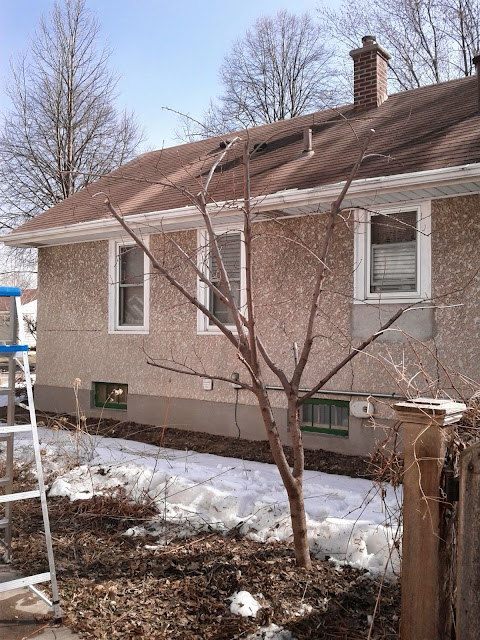 You probably do not recall, since I didn't post about it at the time, that I had a bumper crop of peaches last year, from which I put up several pints of peaches in syrup, and some half-pints of salsa and jam, as well as a couple quarts of frozen fruit and a little puree, in addition to some sickeningly rich ice cream (next time: sorbet).  Not to mention the couple gallons I gave my neighbor, and all the ones that gotten eaten, by me and my dearest loved ones, and by the goddamned squirrels--though I did salvage any number of their cast-offs, along with those sampled by the birds and ants, and the many others that ended up on the ground.

Anyway, I've now cut this lovely tree down by half, at least, and I do not expect she will be bearing much fruit this year. Peaches, I have learned--somewhat late--only fruit on their last year's growth, so they require pretty heavy pruning every year in order to maximize yield and retain a manageable, if not ideal, shape. Fortunately I started out with a tree that had pretty good form.  Unfortunately I let it grow, pretty much unchecked, for its first three (or four?) years, which were likely the most critical to developing a well-formed, productive tree. As butchered as it looks now, I probably should have cut all the longest branches down even further, to two or three feet or so, but I just could not bring myself to do that to such a sweet and lovely being that has brought me so much joy, and scrumptious pleasure.  It'll need at least a few leaves, and perhaps the hope of a fruit or two, to get itself (and me) through this season...maybe next year I'll cut it back again, to where it ought to be, but here's where it stands for now.

The plum got a good trimming, too, though not quite as severe.  There's something about pruning that makes it just a little too easy to get carried away, you know?  What's that about??  I guess the nice thing about these fruit trees is that you don't really need to check yourself; they'll recover from the harshest cutting, even if it takes a few years... In the meantime, I've got much, much more in the works for this season...so come on back now, ya hear?

Oh, and the worms are up, just in time for the Resurrection.  Blessed be!  In the name of the Invertebrates, the Bacteria, and the Fungal Host...