Feeling the lack of veg in my life lately, I stopped by the co-op on the way home this evening to pick up some things green, orange, pink, red, hoping to lift my sagging spirits some. All those quick and easy carbohydrates that I've been depending on to see me through the new dwelling's disfunctional kitchen phase are starting to weigh me down a bit, I think. Fresh spring mix, grapefruits, red pepper, broccoli, clementines, pears should do...Wandering aisles rather haphazardly, I found myself somewhere close to coconut milk and the thought then crossed my mind that I might make a nice red curry, so I took a few steps back toward cauliflower, thinking about bamboo shoots and what else? and then realized that I don't actually have a pot in which to cook such a dish. I had to laugh. I have three little pots, is that all? That's just silly, it really is.

Back at home, I threw off my work clothes and dug up some sweats from the pile on the bedroom floor which has been serving as my "walk-in" closet. Works for now, although I might need something a little better organized before I leave for Paris, I suppose, since all the rest of my apparently totally unnecessary clothes are still in suitcases which I'm going to have to empty before I pack for the trip...

Anyway, I'd been meaning to pull up a copy of last year's seed inventory since Sunday, so I tromped down to the basement and hauled my old computer upstairs, thinking I'd just hook it up to my work laptop (on which I have diligently been putting in overtime for the past three weeks) for easy viewing, but discovered that the ancient beast of a monitor that I have on loan is so old that the cord's wired in, so the whole mess had to be set up again, only all the furniture on which it might sit--all, um, two pieces, that is--are still in the basement, which is where I have now set up my new home office: 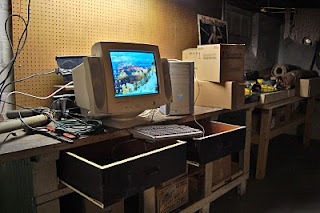 (note the rather lackluster debut of my new camera, here.)
So after all that screwing around I decided it was too late to put together a squash casserole tonight and opted to dine instead on my appetizer of choice, a fingerful of mayonnaisse, followed by my old stand-by: frozen peas (5lb bag on sale!), corn and edamame, cooked with fresh carrots. With copious amounts of butter, salt and freshly ground black pepper (if you can figure out whereever the hell the pepper went to...), you can't go wrong.

I mean, really, I wouldn't have it any other way.
Posted by fremenine at 8:54 PM