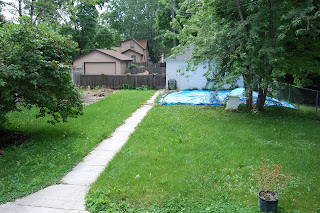 So you need at least one good leg to use a sod-kicker.  I found that out yesterday when, after delivering kick number four, I felt a sharp pinch in my left hip…  Turned out it was nothing, or at least not enough to keep me from tearing up a good portion of the back yard, around the bee hive and under the maple, along the north and south fences, in the shady back corner and around the patio… About halfway through this operation I started to wonder if I have, indeed, lost my mind and am turning into Crazy Yard Lady.  I’ve already got more square footage than I can handle and now I’ve added about half again that much.  If there’s anything I would like to avoid doing—ever—it’s biting off more than I can chew, but I think I’ve come to the point where chewing is no longer feasible; it’s just gulp and swallow hard, stuff the next chunk in… Has to be done, though.  I need a home for my herbs and strawberries, and I need to plant a barrier to separate my existence from Crazy Cat Lady’s.  I need to see something transformed.  After experiencing the metamorphosis of the front garden at my folks’—which actually changed lives—I know it’s possible.  And it cannot wait until next year.  So, off with the lawn.


Yet already I’ve had to call on others to assist (thank you, wonder twin powers!), like a kitten up a tree, a baby bird too big for the nest but crying to have another wriggling worm shoved down my gullet… Speaking of which, I must say I am truly impressed by the quality of the soil in my yard and the multitude of earthworms living in it, a number which has perhaps doubled due to the “stock split” precipitated by the sod cutter, although many of those that escaped being sliced in half were then brutally pulverized by the edge of my trowel as I whacked the dirt free from clumps of grass.  Still a lot of whacking to go yet.  Hopefully having turned much of the sod over to let it dry out in the sun will give the worms a chance to squirm to safety before the next round of beatings begin.


Speaking of which, when I returned the sod-kicker this morning I felt that pinch again, the twinge in my left hip and leg, strongly enough that I had to catch my breath once or twice and remind myself to just let it go...clutching is only going to make it hurt more, and only by releasing into and out of it will I be able to know what the trouble is so that it might be healed and allowed to heal. I know this to be true, but this is exactly what I have NOT been doing during the past few weeks, by any measure.  It’s as if I’d been hit by a car and thrown from my bike, all scuffed up and with a broken wrist, and my response was to berate myself for the idiocy of bike-riding, scour my scrapes with Scotch-Brites as penance and then put in some practice time on the ol’ punching bag to toughen up that weak joint.  Anyway, I’m done with that for a few days, or at least I’m going to lay off the punching bag routine for a while.  But if anyone else out there wants to take a shot, you may as well go for it.  I'm going to go plant my peach. 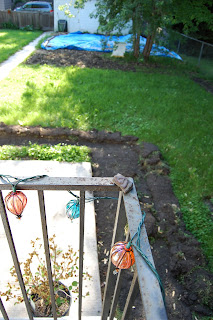 after kicking
Posted by fremenine at 7:13 PM