I stayed home Monday, to make up some lost time. The goal was to get the asparagus planted and then go to work, but one thing leads to another and being dirty all over is just a lot better way to spend an afternoon than being compacted into a cubicle. I watered my thirsty lilies, relocated the rhubarb a little further from the fence, removed every dandelion in the gardens to the south and east of the house and the boulevard. I brutally ripped those tender little shade-grown roses away from their family on the opposite side of the fence and moved them to a sunnier side of the yard, where I hope with all my heart they will not die, sweet things.

In the northwest corner of my backyard there is a big L-shaped pile of dirt that the previous owners liked to call their "pumpkin patch". There's some evidence of squash, but it's difficult to see what they were trying to do there...it's just a heap of meager soil and weeds, with a few piles of yard trimmings scattered around under the rapidly growing grass. The whole thing seems sort of ill-considered and purposeless, and it's in the way of my vegetables, in particular my asparagus, among other things. So after I realized that there was no way I was going to--in one day, having no plan and no wheelbarrow--move all that dirt, I decided to just cover it up, in the hope of smothering it. 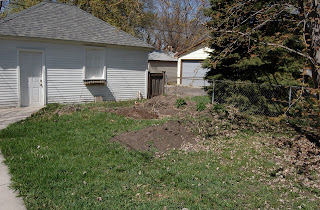 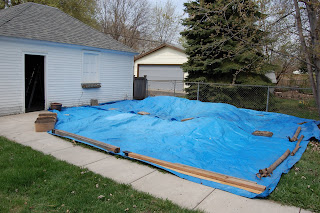 Those three boxes on the left are where I ended up planting the asparagus, to buy myself some time. I caught a glimpse of them out there...graceful ferns waving gently in the breeze, backlit by the setting sun...but I still can't quite place them... Need a few more anchors in the yard to work that out. Anyway, in the middle of the so-called pumpkin patch was a pretty nice little mound of what looked like a mixture of compost and sand, probably just what asparagus wants, so I put some of that in the boxes, and filled out the balance from the heap. Good enough for now. (I hope.)

Early Tuesday, I woke so peacefully to the gentle storms passing through that I could have stayed in bed all day... and I probably should have. Instead I drove myself downtown, walked into a shiny building and sat down in front of a screen which did not greet me upon my arrival, nor did it offer much in the way of sympathy when I began to realize that the person who awoke in my bed that morning was being held down, suffocated by my own hand, just to get through the day... And I did get through it: by the end of the day I'd all but forgotten the rain that quenched this deserted spirit, and that was a Damn Shame. (Heresy, practically, after a March with no snow!)

Anyway, it's Wednesday now, and I've got taxes to file (right on schedule). Here's hoping for rain or windfall...
Posted by fremenine at 7:45 PM